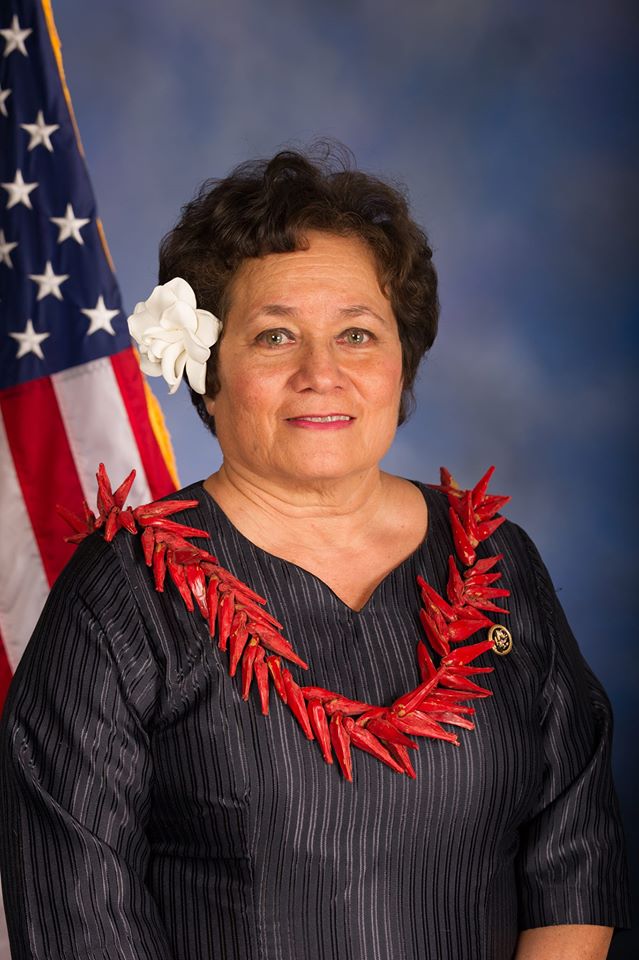 Amata Coleman Radewagen (Aumua Amata), Republican, was elected as American Samoa’s third Member of Congress on November 4, 2014. She is the first woman to serve in the U.S. House of Representatives from American Samoa, the first Republican woman of Samoan descent in Congress and the most senior Republican elected federal office holder of Asian Pacific heritage.

Congresswoman Amata serves on the House Veterans’ Affairs Committee in a senior role as Vice Ranking Member of the full Committee, as well as two of its Subcommittees: The Subcommittee on Health, her top choice of assignments for the Veterans of American Samoa, along with the Subcommittee on Oversight and Investigations.

In her capacity on these committees, she legislates, conducts oversight of laws and Departments in the Administration, and proposes policies and programs. She is active on issues of health, education, welfare, political status, and all economic and social programs concerning the U.S. Territories: American Samoa, Guam, Puerto Rico, the Commonwealth of Northern Marianas Islands (CNMI), and the U.S. Virgin Islands (USVI), along with the Freely Associated States (FAS) of Republic of Palau, the Republic of the Marshall Islands (RMI), and the Federated States of Micronesia (RMI), in addition to overseeing policies affecting the 562 Federally recognized Indian Tribes in the United States.

In a major bipartisan achievement, Congresswoman Aumua Amata Radewagen has consistently ranked highly in bipartisan activity as measured by sponsoring and co-sponsoring bills with those of the opposite party, according to an independent index that examines bipartisanship in Congress. The Bipartisan Index, developed by Georgetown University and the Lugar Center, tracks how frequently a Member sponsors and co-sponsors bipartisan bills, and most recently ranked Amata 19th among all the 441 House Members of the 117th Congress in 2021.

In 2017, the Congresswoman introduced, then Congress passed and President Trump signed into law, her legislation naming the American Samoa Veterans Clinic in honor of her predecessor, the late Congressman Eni F.H. Faleomavaega, and Vice President Mike Pence accepted her invitation to preside over the designation ceremony in a historic visit to American Samoa.

In late 2017, she was effective in having the American Samoa Economic Development Credit (ASEDC) passed as part of the Tax Cuts and Jobs Act, a provision which fosters economic growth and investment as well as stabilizes employment for the nearly 3,000 workers in the American Samoa tuna industry workforce.

In early 2018, the Congresswoman was successful in passing the content and key provisions of her bill, H. R. 385, as part of larger legislation, the Economic Growth, Regulatory Relief and Consumer Protection Act (S. 2155). The measure will protect local American Samoan banking customers from unreasonable delays in check deposits and transfers, making these banking services timely and equitable with people throughout the rest of the U.S.

In 2019, a nonpartisan analysis by Yale Law School and associated Veterans groups determined that Congresswoman Amata led the entirety of both the House and Senate in percentage of women nominated to military Service Academies, as the only Member topping 50 percent female nominees in a balanced track record of nominations.

Since the beginning of 2019, Aumua Amata has served on the President’s Commission for Asian Americans and Pacific Islanders, appointed by President Trump. This is the second such appointment, as she also served in this role under President George W. Bush, appointed in 2001, as a White House Commissioner for Asian Americans and Pacific Islanders (AAPI). At that time, she was the only Pacific Islander on the 15-member Commission. The Commission advised the President on AAPI issues and issued a landmark report on the health care needs of America’s AAPI communities. Amata has been the featured speaker over the years at numerous Asian Pacific American Heritage observances, including those at numerous military bases in CONUS and Europe.

Amata is the fourth of 13 children to the late Governor and Mrs. Peter Tali Coleman. Her father Governor Coleman was the first person of Samoan descent to be appointed Governor of American Samoa and later became the territory’s first popularly elected governor. A member of the Republican Party, he was the only U.S. governor whose service spanned five decades (1956–1961, 1978–1985 and 1989–1993) and one of the longest-serving governors of any jurisdiction in American history.

Prior to being a Member of Congress, the Congresswoman served as a member of the U.S. House of Representatives Majority Leadership Staff for eight years, including Conference scheduling director and supervised the database created to reach out to Asian Pacific and other minority aspirants for congressional staff positions. She also served as scheduling director to U.S. Rep. Philip Crane (R-IL), the dean of the House Republican Conference at the time of his retirement. Earlier in her career, she served at the U.S. Office of Economic Opportunity and the Department of Health, Education and Welfare. She also was the first executive assistant to the first delegate-at-large to Washington from American Samoa.

Aumua Amata also has been involved in promoting democracy and fighting for women’s and minorities rights since the beginning of her career and helping build democratic institutions abroad. As a trainer since 1992, she has participated in missions to Kazakhstan, Cambodia, Kyrgyzstan and Morocco for the International Republican Institute and the International Foundation for Electoral Systems. She has conducted training in Washington for Iraqi, Congolese and Uyghur women leaders. Other international work has included participation in several Pacific regional conferences.

In 2003 she became the first and only Pacific Islander ever chosen as “Outstanding Woman of the Year” by the National Association of Professional Asian American Women (NAPAW). In 2008, she received the International Leadership Foundation’s Visionary Award and in 2013 was presented the “Inspirational Speaker” Award at the Ninth Annual Samoan Athletes Heart of Champions Ceremony in La Mesa, California.

A founding member of the American Samoa Society, other affiliations over the years have included the Guam Society of America and the Hawaii State Society as well as the Women’s Foreign Policy Group in Washington and the Independent Women’s Forum. She also belongs to the Pan Pacific and Southeast Asia Women’s Association.

A 25-year cancer survivor, Amata has served as spokesperson for the Samoan Women’s Health Project to promote cancer awareness and bring mammography to the territory, has been liaison to the National Breast Cancer Coalition since 1993, and has volunteered with the hospital Women’s Auxiliary. She also is a member of the board of Field House 100 American Samoa, a non-profit organization devoted to finding athletic scholarship opportunities in the states for talented high school athletes in American Samoa.

She is married to Fred Radewagen, and they have three grown children and two grandchildren.