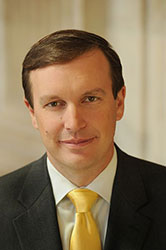 Contact Senator Chris Murphy (D-CT)
Christopher Scott Murphy is an American politician and author serving as the junior United States Senator from Connecticut since 2013. A member of the Democratic Party, he previously served in the United States House of Representatives, representing Connecticut's 5th congressional district from 2007 to 2013.

Senator Christopher Scott Murphy is an American author, lawyer, and politician. He is serving as a junior U.S. Senator from Connecticut since 2013 under the Democrats.

Senator Chris Murphy was born in White Plains, New York, on August 3, 1973. He graduated with a B.A. in history and political science from Williams College in 1996. He also studied at the University of Oxford.

Senator Chris Murphy started his political career while he was a student. He served as a member of the U.S. House of Representatives from 1999 to 2003. He was also elected as a member of the state Senate from 2003 to 2006. During his time at the Connecticut legislature, he practiced real estate law at Hartford.

In 2006, Murphy ran for the U.S. House of Reps seat and defeated Republican Nancy Johnson. He was re-elected in 2008 and 2010. In 2012, Murphy won the U.S. Senate seat after defeating Republican Linda McMahon

While in the U.S. Senate, Murphy has been a strong voice in the formation and implementation of Acts and reforms to improve quality of life and standard of living in Connecticut.

He was outspoken for his commendable works on job creation, healthcare reforms. He also worked on improving education and promoting security via gun law reforms and an innovative foreign policy.

Murphy was one of the leading supporters of the Affordable Care Act. He fought very hard against repealing the Act, noting its positive impact on his constituency.

Murphy has a 100% rating with the Brady Campaign to Prevent Gun Violence. Senator Chris Murphy was a strong advocate of the prevention of gun violence. He also supported background checks on firearms and research to end gun violence.

Murphy was one of the Senators that introduced the Protecting Sensitive Location Act. The Act mandated ICE agents to get approval before engaging at sensitive locations

Senator Chris has been charged to court many times after he missed his mortgage payment. Also, Murphy has faced home foreclosure and apartment eviction proceedings due to failure to pay rents and mortgage dues. After missing several rent payments for his Southampton apartments, Chase Home Finance sued him in 2007.

In 2019, the Russian government denied Murphy’s visa into Russia. He was visiting the country as a part of a congressional delegation to Russia amid its strained ties with the U.S.

His colleague, Senator Ron Johnson, was also denied entry in the same week