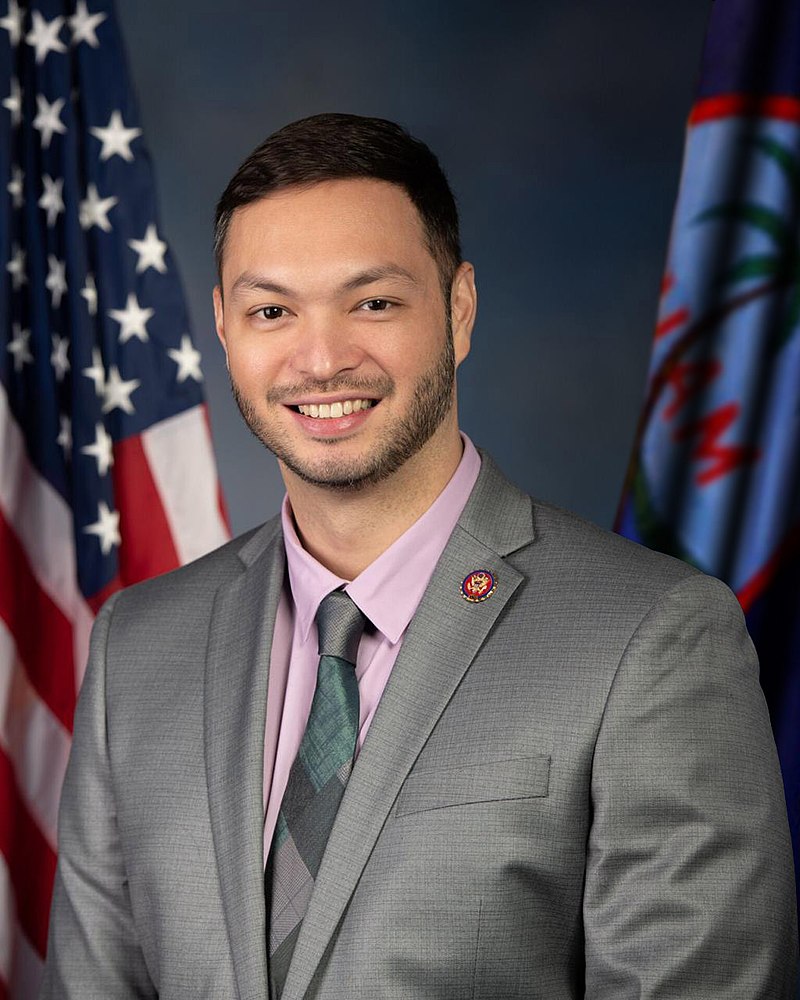 Michael is the Guamanian Democratic Party politician, currently serving as the Delegate to the U.S. House of Representatives for Guam’s at-large congressional district. San Nicolas was elected by his colleagues in the 116th Congress to serve as Vice-Chair of the House Financial Services Committee. From 2013 to 2019, San Nicolas served as senator in the 32nd, 33rd, and 34th Guam Legislatures.

In November 1998, President Bill Clinton visited Guam and delivered a speech to a large rally gathered at Adelup. As a youth speaker, San Nicolas introduced President Clinton to the attendees.

Prior to running for the legislature in 2012, San Nicolas had worked as Chief of Staff for Senator Carmen Fernandez in the 27th Guam Legislature and subsequently as Assistant Vice President and Financial Advisor at the Bank of Guam.

Repealing pay increases for elected and appointed officials After the 2014 general election, acting Governor Ray Tenorio introduced a bill to increase salaries of elected and appointed officials retroactively. The bill was passed by the legislature in San Nicolas’ absence. In December, San Nicolas introduced a bill to repeal the raises, which failed passage. Starting later that month, San Nicolas began to donate the pay increase to local charities.

San Nicolas introduced a bill in 2015 to repeal the elected and appointed officials’ pay raises, among other related matters. The bill was enacted, but the provision repealing the pay raises was removed before passage. San Nicolas revisited repealing the pay raises for elected and appointed officials by introducing a new bill later in the year, but it failed passage in November. The Guam Legislature reconsidered and passed the new bill in January 2016. Governor Calvo vetoed the new bill. An attempted override of the new bill failed.

Senator San Nicolas introduced a bill in 2017, which would reduce the salaries of elected and appointed officials that had been raised by Public Law 32-208. A similar measure, which affected only the salaries of the Attorney General, the Public Auditor, the Governor, the Lieutenant Governor, and members of the Guam Legislature was introduced days prior was passed by the legislature in March, vetoed by Governor Calvo, then was overridden by the legislature in May.

In May 2014, San Nicolas introduced a resolution to request that Congresswoman Madeleine Z. Bordallo introduces legislation to the United States Congress to allow the government of Guam employees to be covered under Social Security. In June, the resolution passed with the unanimous support of the Guam Legislature.

In April 2015, Senator San Nicolas met with professionals in the Social Security Administration and the Staff Director of Rep. Xavier Becerra (D-CA) Ranking Member of the Subcommittee on Social Security to secure a path to providing Social Security benefits to government of Guam workers.

In 2017, San Nicolas introduced Resolution No. 215-34 (COR), which requests the Federal Trade Commission to review the trade practices and market concentration in Guam’s fuel market, which passed unanimously.

In March 2014, San Nicolas introduced a bill to allow foster children to be included in the government of Guam’s group health insurance, expanding their treatment options. On October 3, the bill was passed by the Guam Legislature.

In January 2015, Vice Speaker Benjamin J.F. Cruz introduced a bill that would establish a new Hybrid Retirement System. Shortly thereafter, Senator San Nicolas proposed the establishment of a retirement plan that would mirror the contribution rates of social security and provide for a potential transition to Social Security for the government of Guam employees. In February 2016, Vice Speaker Cruz and San Nicolas announced a compromise retirement bill hat provided for a Hybrid Retirement Plan and a cash balance retirement plan. The compromise bill passed unanimously in May 2016. Governor Eddie Calvo vetoed the bill. In September, the Legislature overrode the Governor’s veto.

In November 2017, San Nicolas announced his intention to become the 2018 general election candidate of the Democratic Party of Guam to serve as the Guam Delegate to the U.S. House of Representatives in the 116th U.S. Congress. He defeated eight-term incumbent Guam Congressional Delegate Madeleine Z. Bordalloin the Democratic primary election in August by 3.4% of the vote, advancing to the general election in November. He defeated Republican Party candidate Doris Flores Books in the General Election in November.

San Nicolas was sworn in as Guam’s Congressional Delegate to the 116th U.S. Congress on January 3, 2019.

San Nicolas has been assigned to the following committees and subcommittees of the U.S. House of Representatives:

San Nicolas has joined a number of congressional caucuses, including:

During the 2018 election, San Nicolas proposed that the Supplemental Security Income program should be extended to residents of Guam. San Nicolas introduced the Guam Supplemental Security Income Equality Act on January 3, 2019. Senator Mary Camacho Torres has introduced Resolution No. 77-35 (COR) in support of the bill. Thirty-eight members of the Congressional Hispanic Caucus support the bill.

The Guam World War II Loyalty Recognition Act was enacted as a provision of the National Defense Authorization Act for Fiscal Year 2017. The United States Treasury has advised that without further action by the U.S. Congress, claimants would not be able to be paid. San Nicolas has introduced two bills to allow payments to be made to those who have filed war claims, H.R. 1141 and H.R. 1365. A resolution has been introduced in the Guam Legislature by Senator Amanda Shelton in support of H.R. 1141.

Cockfighting in US territories

Cockfighting is believed to have been introduced by Filipinos to Guam in the 19th century. In the month before San Nicolas took office, the Agricultural Improvement Act of 2018 was enacted, extending a federal ban on animal fighting to U.S. Territories, which had previously been excluded, effective a year following enactment. San Nicolas has cosponsored Jenniffer Gonzalez-Colon’s bill to repeal the ban which would affect cockfighting in Guam.

Agent Orange and other herbicide exposure in Guam

Agent Orange and other herbicides were used for tactical purposes in Vietnam during the Vietnam War. Herbicides related to Agent Orange with known negative health effects are also documented as having been used on Guam during the same period. In recognition of this fact, San Nicolas introduced H.R. 1713 to provide for presumptive herbicide exposure status for veterans seeking health coverage and compensation who served in Guam around the Vietnam War period. A resolution has been introduced in the Guam Legislature by Senator Therese Terlaje in support of H.R. 1713.

During a meeting of the financial service committee, San Nicolas urged for the U.S. Treasury to reimburse the Government of Guam for payments it has made to individuals claiming the Earned Income Tax Credit (EITC) for the Guam income tax.