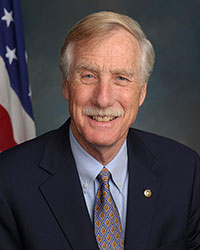 Contact Senator Angus King (I-ME)
Angus Stanley King Jr. is an American politician and attorney serving as the junior United States Senator from Maine since 2013. A political independent since 1993, he was the 72nd Governor of Maine from 1995 to 2003.

Senator Angus King Jr. Is an American lawyer and politician. He has been serving as a junior US Senator from Maine since 2013. He also served as the Governor of Maine from 1995 to 2003.

King was born in Alexandria, Virginia, on March 31, 1944. He enrolled in Dartmouth College and graduated with a Bachelor’s degree in 1966. He furthered and earned his law degree at the University of Virginia School of Law in 1969.

After his law degree, he worked as a staff attorney for Pine Tree, a legal assistance agency in Skowhegan. In 1972, he became the chief legal counsel to the US Senate Subcommittee on Alcoholism and Narcotics in Washington. He also served as the legal assistant for Senator William Hathaway.

After surviving malignant cancer, King returned to Maine in 1975. There, he worked with a private law firm in Brunswick.

In 1983, Senator Angus King was employed as an executive and counsel to Swift River/Hafslund Company. In 1989, he founded Northeast Energy Management Inc., which fostered electrical energy conservation projects. But, he sold the company in 1994

In 1994, King started his political career with a bid to run as the governor of Maine. Formerly affiliated with the Democratic Party, he announced his desire to run for the seat as an Independent.

He won the election with 35%, compared to former Governor Brennan’s 34%. He was reelected again and served till 2003.

In 2012, King announced his intention to run for a seat in the US Senate. This was after Senator Olympia Snowe vacated her seat. King won and assumed office in 2013. He was Maine’s first Independent US Senator. He won again in 2018

In his time in the US Senate, Senator Angus King worked hard to strengthen state and national security. He also conducted critical thinking oversight in his state and nation’s intelligence community.

He has supported, sponsored, and cosponsored many economic reform bills that fostered a commonsense budget. He also worked to reduce the national budget, revitalize agriculture and empowerment. He has also worked on several tax reform bills and acts.

He also voted for the increment of minimum wages.

To improve environmental quality, he opposed the drilling of the Arctic National Wildlife Refuge due to its dangers.

In 2021, Senator King and Chuck Grassley’s donor-advised fund bill was met with criticism.

The Don’t-advised funds, DAFs allow rich philanthropists to donate to charity. Yet, the DAFs have no deadline for distributing donations to the needy, fueling up criticisms about the bill. Meanwhile, much of the donated funds ended up sitting in the account.

Senator King was part of the Senators that voted for the conviction of President Trump for his scandal with Ukraine and abuse of power.