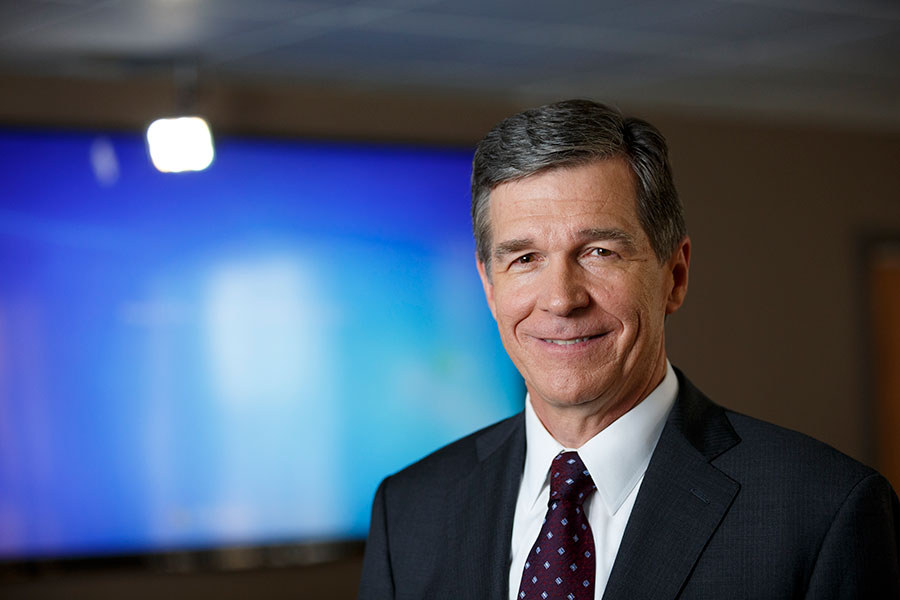 contact Governor Roy Cooper
Governor Roy Cooper has spent nearly three decades in public service protecting families, keeping communities safe, and working to create jobs and improve schools. The son of a school teacher, he knows that education creates opportunity and he has worked throughout his career to strengthen our schools and create a sound foundation for our state’s children. In the NC House and Senate, Gov. Cooper fought to increase teacher pay and reduce class sizes. He wrote North Carolina’s first children’s health insurance initiative. During his service in the legislature, Gov. Cooper worked with members of both parties to get balanced budgets that raised teacher pay to the national average, grow the economy and cut taxes for middle class families. In 2000, the people of North Carolina elected Gov. Cooper as Attorney General, where he continued to fight for families during his four terms. Born and raised in Nash County, he attended public schools and worked summers on the family farm before attending UNC-Chapel Hill on a Morehead Scholarship. His mother, Beverly Cooper, worked as a school teacher, and his father, Roy Cooper Jr., farmed and practiced law. After earning a law degree from UNC, Roy Cooper returned home to Nash County to practice law and, with his wife Kristin, raise three daughters – Hilary, Natalie, and Claire.

Born and raised in Nash County, Roy attended public schools and worked summers on the family farm before attending UNC-Chapel Hill on a Morehead Scholarship.

His mother, Beverly Cooper, worked as a school teacher, and his father Roy Cooper Jr. farmed and practiced law.

After earning a law degree from UNC, Roy returned home to Nash County to practice law and, with his wife Kristin, raise three daughters – Hilary, Natalie, and Claire.

Roy entered public service because he loves North Carolina and understands the challenges facing our families and communities. At home, he served as a Sunday School teacher and tutored in public schools. In the NC House and Senate, Roy fought to increase teacher pay and reduce class sizes. He wrote North Carolina’s first children’s health insurance initiative.

Roy believes every child in North Carolina deserves the same opportunities that he had – and that he wants for his own daughters.

Roy has announced tens of thousands of new jobs across North Carolina, including in North Carolina’s rural and economically distressed counties. He has also created initiatives such as NC Job Ready, Finish Line Grants, and Hometown Strong.

Governor Cooper worked with members of both parties to repeal HB2 to fight discrimination and repair the damage to North Carolina’s economy and reputation. His leadership put North Carolina back on a path to success and opened the door for thousands of new jobs and the return of concerts, shows, and major athletic events such as the NBA All-Star Game.

From his first day in office, Roy has fought for better teacher pay and funding for our classrooms. He has pushed the Republican legislature to go much farther than it wanted to go resulting in a 9.5% teacher raise since he took office and an improvement in the national rankings. Under his leadership, North Carolina has expanded pre-kindergarten programs and re-established the Teaching Fellows Program to recruit and support highly qualified teachers in North Carolina.

Roy has worked across party lines to combat the opioid crisis in North Carolina. He launched the state’s first Opioid Action Plan in 2017 and, as a result, opioid prescriptions have dropped by 24 percent, emergency room visits for opioid misuse have declined by 10 percent and opioid related deaths have decreased by 5 percent. He also serves on the national Commission on Combating Drug Addiction and the Opioid Crisis.

Roy has fought tirelessly for Medicaid expansion that would extend coverage to half a million people, including families and veterans, without additional state tax dollars. Medicaid expansion would also bring tens of thousands of jobs to North Carolina, reduce the cost of private health insurance and keep rural hospitals from closing their doors.

Together with the most diverse and qualified cabinet in the history of the state, Roy has fought for a safer and more just Carolina. He issued an Executive Order to make North Carolina the first state in the south to ban state funding to any organization that engages in conversion therapy, a scientifically dubious and dangerous practice that is harmful to the LGBTQ community.

He has also led our state through devastating hurricanes and floods, saving lives and helping to invest more than $3.2 billion in recovery to rebuild our state stronger and smarter.

In 2000, Roy was elected Attorney General. As North Carolina’s top law enforcement official, Roy protected families across the state. He cracked down on child predators, worked to increase penalties for drug dealers, and oversaw a sharp (30%) decrease in crime. Roy also prioritized consumer protection, and fought to keep utility rates low, putting predatory lenders out of business and cracking down on telemarketers.