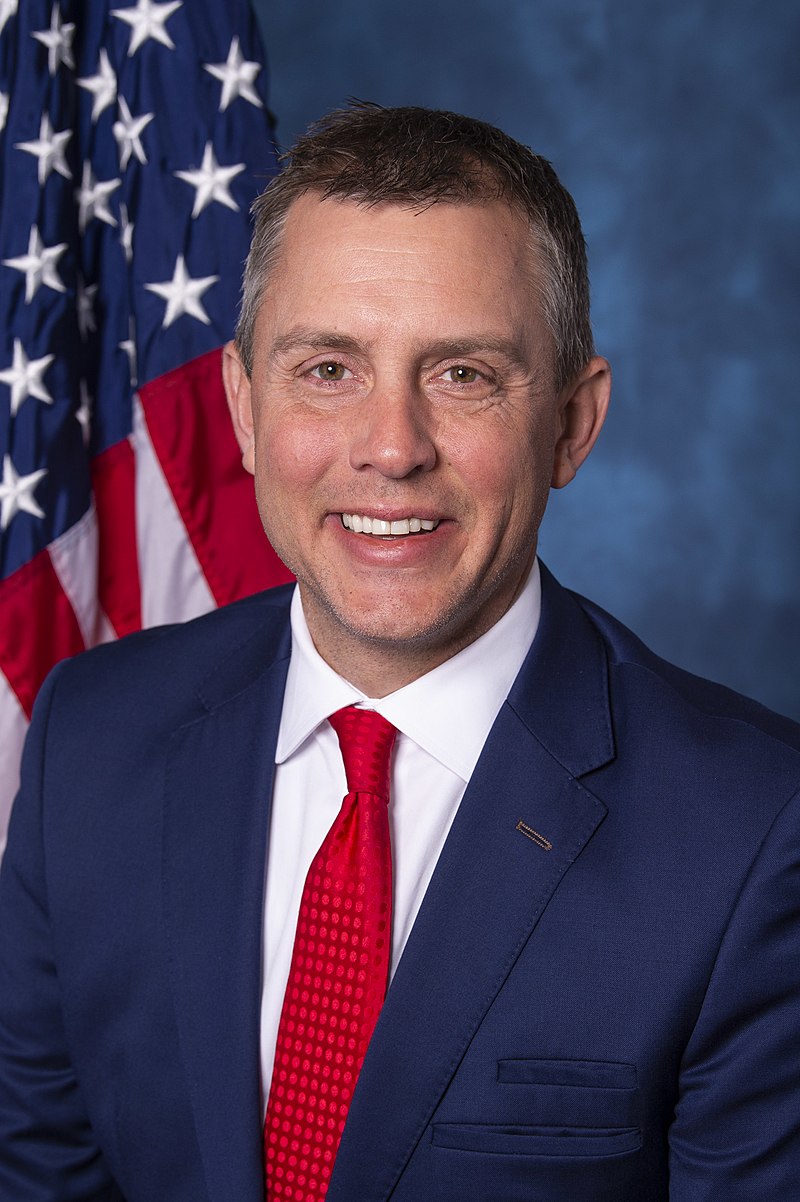 Congressman Kelly Armstrong is a lifelong, devoted North Dakotan and a tireless advocate for making North Dakota a better place to live and work. With his background in business, his love for the outdoors and his volunteer and public service experience, Kelly is fighting for our North Dakota values in Washington and working to advance positive changes to benefit our state and country.

Kelly’s childhood in Dickinson, North Dakota, inspired in him a passion for the outdoors. In the summers, he could be found on Lake Sakakawea and during the fall he was bow hunting in the badlands.

After graduating from Dickinson High School in 1995, Kelly attended the University of North Dakota but continued to grow his roots in Dickinson, returning home in the summers to coach the Dickinson Roughriders American Legion baseball team. Kelly earned a bachelor’s degree from UND in 2001 and a law degree from UND law school in 2003.

It was at UND law school where Kelly met the love of his life, Kjersti. She was part of a law school exchange program with her university in Norway. They married in 2004 and spent the early years of their marriage in Grand Forks, where Kelly began his law career while Kjersti finished her degree.

Kelly and Kjersti later moved back home to Dickinson, and Kelly opened a second office of the law firm. While practicing law, Kelly became known as someone who worked tirelessly for his clients and gained the respect of his counterparts, the judiciary and law enforcement.

Back home in Dickinson, Kelly and Kjersti started their family. Anna was born in 2007 and Eli in 2010.

In 2011, Kelly joined his family’s business, Armstrong Corporation, where he served as vice president. Founded in 1975, this small family business expanded over time to include oil and gas exploration, agricultural operations and investments in local businesses and striving entrepreneurs. The Armstrong family’s commitment to their community was officially recognized with the Roughrider Award (not the big one… there isn’t a painting of the Armstrongs hanging in the North Dakota Capitol) in 2013 for their initiative to employ and provide opportunities for veterans returning from deployment overseas.

Kelly’s commitment to family and community is evident in everything he does. A recipient of the North Dakota Bar Association’s Community Service Award, Kelly served as a volunteer fireman for the Dickinson Fire Department from 2005 through 2012, coached girls’ softball and boys’ baseball and is active in charitable works for many local organizations, including his local hospital, university, police association, volunteer fire department, best friends mentoring program, domestic violence rape crisis center, and the Teddy Roosevelt Bully Pulpit Board. He also served as President of the Dickinson Baseball club for ten years and was elected to the North Dakota Dickinson Baseball Hall of Fame in 2017.

Kelly grew his service to the community in 2012, when he was elected to the North Dakota State Senate for District 36. Chairing multiple committees during his service, Kelly spearheaded DUI reform legislation, a $2 billion statewide infrastructure investment and solving the lakebed mineral crisis.

Kelly was elected Chairman of the North Dakota Republican Party in 2015 after seeing firsthand the need for decisive and effective leadership of the party. Kelly led the state party in 2016 to landslide victories for President Donald Trump, Gov. Doug Burgum and North Dakota legislative majorities.

Washington needs our North Dakota values now more than ever, and no one embodies them more than Kelly. The real changes in Washington are just beginning, and Kelly’s commitment, energy and drive will keep pushing those positive changes forward.

North Dakota’s agricultural and energy industries provide the country and the world with food, oil, gas and electricity. In Congress, Kelly works to protect the livelihood of farmers and ranchers, unleash North Dakota’s full energy potential and ensure North Dakota has a strong voice.

Kelly serves on the House Energy and Commerce Committee for the 117th Congress. Kelly was first elected to the U.S. House of Representatives representing the entire state of North Dakota in 2018.

Over the course of the last few years, we have seen the true power of the American people. When government gets out of the way, our economy grows, our businesses thrive, and our people take home more money in their paychecks.

But the fight in Washington is not over – it is just beginning.

Our farming, ranching, and energy industries provide America and the world with food, oil, gas, and electricity. With President Trump’s help, we have seen what the right kind of leadership can do for North Dakota. The Trump agenda has already rolled back Obama-era regulations that were choking off our farmers, ranchers, and energy producers; and creating hardships for the industries that are so vital to our state.

Kelly’s focus in Congress is to ensure the future is bright for all of our kids – where they have every opportunity to succeed right here in North Dakota. By reducing the size of government, we can unleash the full potential of our citizens, create jobs, and let the people of this state do what they do best. Make North Dakota the best place in the world to live, work, and raise a family..

Kelly Armstrong is a top-ranked conservative senator and proud of the work he has achieved here at home. In the legislature, Kelly has worked tirelessly to advance legislation that is important to North Dakotans.

Kelly helped grow the economy across North Dakota. He was honored to sponsor the Surge funding bill which brought over a billion dollars in infrastructure spending. This historic legislation brought money to communities all across the state that were desperate for improvements to our roads, schools, water treatment plants, and other utilities. Never before had a bill of this magnitude been approved by our legislature so quickly. And the results have been obvious. Communities have seen the infrastructure improvements that have enhanced the lives of our friends and neighbors and helped businesses grow.

He protected private property owners. In 2017, Kelly Armstrong sponsored a bill that will result in thousands of mineral acres being returned to private mineral owners around Lake Sakakawea. Many of these people are farmers and ranchers whose families have made North Dakota their home for generations. Through no fault of their own, their minerals were taken from them by the state through a process that was unfair, unjust, and un-American. It’s not right and their property is protected because of Kelly’s efforts.

We need to bring conservative values and conservative reality to the budget. Our National debt is crippling this country. We have to stop kicking this can down the road to our children and grandchildren. Now is the time for DC to get serious about balancing the budget just like we do in North Dakota. We need a proven leader who won’t back down and is willing to make the hard choices.

The federal government has bloated to an unsustainable level. Even now Washington bureaucrats continue to pump out regulation that stifles business, infringes on our states’ rights, and costs our taxpayers dearly.

Kelly introduced the REINS Act which requires federal agencies to submit major regulations to Congress for approval and guarantees that no major regulation becomes effective until Congress approves it.

Kelly believes that life is sacred and has been a defender of life at all stages. In Washington, he will work to finally pass the 20-week abortion ban and do all he can to promote the pro-life agenda. He supports the Hyde Amendment’s ban on using federal funds for abortion and supports diverting funding from Planned Parenthood into Community Health Centers that do not perform or encourage abortion.

Kelly cosponsored the Pain Capable Unborn Child Protection Act and the Born Alive Abortion Survivors Act. Together these bills would ban abortion after 20 weeks and would require a healthcare provide to provide care to any child who exhibits signs of life after an abortion procedure. He also co-sponsored the Life at Conception Act which affirms an unborn child’s right to life under the 14th Amendment.

The opioid crisis is killing our children. The grip of this epidemic does not discriminate by race, age, or economic status. We need a full throated plan of attack to combat these deadly drugs. We need smart policy that provides more treatment, education, and accountability.

We have to once and for all secure our borders. This isn’t about stopping immigration; this is about ending the flow of drugs and human trafficking along our southern borders. Kelly has supported President Trump’s efforts to build a wall along the border with Mexico and has co-sponsored the Fix the Immigration Loopholes Act and the BOUND Act to help stop the flow of illegal immigrants, drugs and counterfeit merchandise across our borders.

Obamacare is an unmitigated disaster. The costs of this terrible policy are even worse in rural states. Providers are fleeing our markets and driving up healthcare costs on North Dakota families.

And Kelly has been a leading champion for law abiding gun owners. Kelly has fought back against the efforts of Nancy Pelosi and House Democrats to infringe upon our second amendment freedoms.

Kelly has helped save lives when it comes to addiction. He has helped marshal through the most sweeping DUI reform in our history and increased penalties for repeat offenders and provided more tools for law enforcement to ensure that offenders are staying sober and getting treatment. Last year he voted to pass historic legislation that will work towards dealing with addiction related crimes. Addiction is an issue we need to confront head on. We cannot build enough prison cells to solve this problem. Kelly supports providing tools and treatment to make sure young addicts can become successful members of our society not better criminals, while still making sure we hold people accountable for their actions.

Protecting the Rule of Law

Kelly supported new rules to crack down on extremist protesters. The DAPL protests exposed some serious flaws in our century code and Kelly supported legislation that strengthened our laws and provided our law enforcement the tools they need to defend us against people who have no respect for our laws or our citizens. No longer will out-of-state environmental extremists get away with causing destruction and chaos in North Dakota.

Giving Farmers and Ranchers the Opportunity to Succeed

As a lifelong resident, Kelly understands that agriculture is still the backbone of North Dakota and he has worked hard to ensure that our farmers and ranchers concerns are heard. Last session Kelly sponsored a bill that would ensure that our local farm implement dealers would be protected from national manufacturers unfair demands. Our local businesses had no real bargaining power and were being forced to stock equipment creating a terribly unfair burden on our local farming and ranching communities.

Finally, Kelly is running for Congress because he truly loves North Dakota.

North Dakota is the Armstrong’s home and Kelly has worked hard to make it a better place. He will go to work every day to defend our jobs, our values, and our way of life. Kelly Armstrong has always been a fighter. He’s not afraid to confront challenges head on here or in Congress is where the battle lines are going to be drawn.

This next election is crucial. It is critical that Republicans maintain the House. If the Democrats seize control, sound policy will give way to gotcha politics and partisan witch hunts.