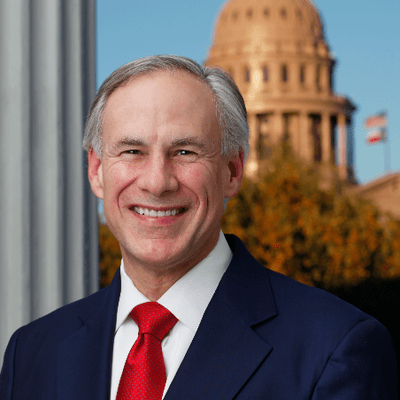 contact Governor Greg Abbott
Greg Abbott is the 48th Governor of the State of Texas. Before his election in 2014, Greg Abbott was the 50th and longest-serving Attorney General of Texas, where he earned a national reputation for defending religious liberty and protecting Texas communities and children. He also previously served as a Justice on the Texas Supreme Court and as a State District Judge in Harris County. Governor Abbott was born in Wichita Falls and raised in Duncanville. After graduating from The University of Texas at Austin, he earned a law degree from Vanderbilt University Law School. Governor Abbott and his wife, Cecilia, a former teacher and principal, and the first Hispanic First Lady of Texas, were married in 1981. Their daughter, Audrey, is a recent college graduate.

Named “Best Governor in the Nation” in 2020, Governor Greg Abbott continues to build on his record as a strong conservative leader who fights to preserve Texas values and ensure the Lone Star State remains the best place to raise a family, build a business, and create greater opportunity for all.

Under Governor Abbott’s careful stewardship of the ninth-largest economy in the world, the Lone Star State added more than 1 million new jobs during the first five years of his administration.

With the Governor’s unwavering commitment to expanding opportunity for all hardworking Texans, the Lone Star State is the top state for attracting job-creating capital investments and is among the top states for jobs created by African American, Hispanic, women, and veteran business owners.

As our nation faces a surge of illegal crossings at our southern border, Governor Abbott is taking action with the most robust border security plan of any state in U.S. history. That includes launching Operation Lone Star, which deploys air, ground, marine, and tactical border security assets to high threat areas to deny Mexican Cartels, smugglers, and human traffickers the ability to move drugs and people into Texas. The Governor also signed a budget that allocates a record $1 billion to border security. Additionally, Governor Abbott announced plans to build a border wall in Texas—allocating $250 million as an initial down payment.

Addressing the state’s most pressing issues:

In the 87th Legislative Session, the Governor achieved significant legislative victories to build a safer, freer, and more prosperous future for Texas: adding COVID liability protections for Texas businesses, employees, and healthcare providers; expanding broadband access; enacting laws to stop cities from defunding the police; reforming the Electric Reliability Council of Texas; and weatherizing the state’s power system to protect against extreme weather events. Other successes include passing Constitutional Carry, defending religious freedoms, and passing the heartbeat bill to ensure every unborn child with a heartbeat will be saved from abortion.

Before his election in 2014 as the 48th Governor of Texas, Greg Abbott was the 50th and longest-serving Attorney General of Texas, earning a national reputation for defending religious liberty and protecting Texas communities and children. He also previously served as a Justice on the Texas Supreme Court and as a State District Judge in Harris County.

A native Texan and avid sportsman and hunter, Governor Abbott was born in Wichita Falls and raised in Duncanville. After graduating from The University of Texas at Austin, he earned a law degree from Vanderbilt University Law School.

Shortly after graduating from law school, he was partially paralyzed by a falling tree while jogging. From his faith and family, he gained strength, recognizing “our lives are not defined by our challenges, but by how we respond to them.”

Governor Abbott and his wife, Cecilia, a former teacher and principal, and the first Hispanic First Lady of Texas, were married in 1981. Their daughter, Audrey, works in the music industry.

Cecilia Abbott’s story reminds us all that the American Dream is alive and well in Texas. The granddaughter of immigrants from Mexico, Cecilia was raised in San Antonio by parents who were both educators, and who instilled in Cecilia, her sister, and two brothers a love of learning and helping others. Cecilia took their lessons to heart and studied at the University of Texas at Austin before subsequently earning three degrees from the University of St. Thomas in Houston: a Bachelor’s degree in Psychology, a Master’s degree in Education, and a Master’s degree in Theology.

Cecilia then devoted her life to serving others. She has been a teacher, vice-principal, and principal at several Catholic schools across Texas. Most recently, she served as the principal of the Cathedral School of Saint Mary in Austin from 1996 to 2001. Cecilia then went on to another noble calling working in senior health care services, where she served as Managing Director of Community Relations from 2004 to 2013 for a health care company specializing in senior adult health care facilities and services.

Cecilia has been equally devoted to helping others in her personal life as well. She currently serves on the Cathedral School of Saint Mary Advisory Board and on the board of the Taya and Chris Kyle Foundation. Cecilia is also a volunteer for Meals on Wheels Central Texas.

Cecilia is a former member of the State Board for Educator Certification, where she served from 2001 to 2008. She has also served on advisory boards for: the Alzheimer’s Association Capital of Texas Chapter; the National Center for Missing and Exploited Children Texas Regional Office; the Holy Trinity Seminary; the Catholic Diocese of Austin Schools; the Saint Gabriel’s Catholic School Board of Trustees; Ballet Austin; the Women’s Symphony League of Austin; the Dell Children’s Women’s Trust; and the Principals’ Center at Harvard Graduate School of Education.

Cecilia believes strongly in giving back. Her signature initiative as First Lady combines the two things that she is most passionate about — Texas and philanthropy. She calls it Texanthropy, through which she actively promotes volunteerism and service to others across Texas. Cecilia has also partnered with the Texas Department of Family and Protective Services (DFPS) on a similar initiative — Network of Nurture — to raise awareness about the ways Texans can support the children and families in the state’s child welfare system. Mrs. Abbott has collaborated with the Governor’s Child Sex Trafficking Team, DFPS, and a diverse group of faith leaders across Texas working together to develop effective strategies to end human trafficking through the Governor’s Response Against Child Exploitation (GRACE) initiative.

Cecilia is a classical music devotee, having begun playing the piano at the age of six. Her piano training came in handy when she moved into the Castilian Dorm at the University of Texas, where she serenaded her future husband from behind the keyboard with music, the likes of which he had never heard before. She is also a prolific animal lover and has nurtured numerous dogs into their late teens. She has raised a variety of pets, including a Nubian goat named Petunia.

Most importantly, Cecilia is a proud mother to her daughter, Audrey, and a devoted wife to her husband of 40 years, the Governor of Texas, Greg Abbott. With her husband’s election as Governor, Cecilia made history by becoming the first Hispanic First Lady of Texas. The Abbott Family lives in Austin with the First Dogs of Texas, Pancake and Peaches.