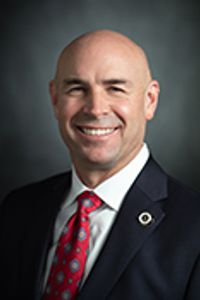 Contact Representative Jake Ellzey
Ronald Jack Wright is an American Republican politician from the state of Texas. He is the member of the United States House of Representatives from Texas's 6th congressional district. The district is anchored in Arlington and southeastern Fort Worth, and also includes a swath of exurban territory to the south.

Congressman Jake Ellzey proudly represents Texas’ 6th congressional district which spans from the Rangers Ballpark in Tarrant County to the booming suburbs of Ellis and Navarro Counties. Ellzey, a native Texan, lives with his wife Shelby and their two children on a ten-acre ranch in Ellis County, where they have spent the last decade.

At the age of seven, Jake decided he wanted to become a fighter pilot. Fifteen years later, he was a graduate of the U.S. Naval Academy, earning a Bachelor of Science degree in Political Science. Since his graduation, Ellzey has served our country and Texas for over 33 years.

Throughout his 20-year Naval career, Ellzey flew H-60 helicopters, F-14 Tomcats, F/A-18 Hornets, and Super Hornets in defense of our nation. He has logged 830 carrier landings, and he served a tour as a Joint Terminal Attack Controller on the ground embedded with Navy SEALs. He was deployed nine times during his military career with five combat tours over Afghanistan and two in Iraq. Following his tour as Commanding Officer of Strike Fighter Squadron, he served as the Air Boss on the USS Ronald Reagan.

After his Navy career, he served Texas as a Commissioner of the Texas Veterans Commission, State Representative of the 10th District of Texas, ran a small business, and worked as an airline pilot.

I’m a proud gun owner and lifetime member of the NRA. I spent 20 years serving our nation abroad to keep American families safe and the last thing I want is for them to be defenseless at home.

The new administration and their leftist allies have already shown themselves time and time attack to be radically anti-gun. The way to stop crime is NOT by taking away your right to protect yourself. I oppose any and all federal regulations on the right to keep and bear arms. I will be a relentless and unapologetic defender of our 2nd Amendment.

PROTECT THE RIGHT TO LIFE

Every life is a precious gift from God. As a father and a Christian, I 100% support the right to life as the first and most vital right.

The current administration is stripping federal protections from unborn babies across the board, including the controversial Mexico City policy, which prohibited US dollars from being used to fund abortions overseas. They’ve also made it clear they intend to attack the Hyde Amendment, which has blocked federal Medicaid funding for abortion since 1976.

We NEED strong representation in Washington that will stand for the right to life and stand against attacks on the unborn and all innocent life in our nation.

Biden and his dangerous open border policies have created one of the worst humanitarian crises in our nation’s history. There can be no solution to the generations long problem of illegal immigration without a completely secure border. We must complete the wall and gain complete control over who enters our country to stop human trafficking, put an end to drug violence, and keep our families safe.

Your property is just that—yours. Washington sometimes forgets that. As your next Congressman, I will stand for the rights of Texans to keep, manage, and use their own property. Pet projects like the proposed high-speed rail are made by out-of-touch politicians who have forgotten whose land it really is.

We must remind Washington that what’s not theirs is NOT theirs.

With the current administration threatening draconian “protections,” we need someone who will stand up for us and our families against Washington cronies. Many regulations are touted as environmental or workers’ protections are cover for big-business and special interests looking to get an edge in the market.

We must stop the job-killing red tape that hurts small businesses while helping special interests. Get government out of the way of job growth and let our economy thrive.

Our schools should be places to equip the next generation of leaders, not run social experiments on our children. As a father with two children in public school, I’m committed to making sure our public schools are as strong and as well-equipped to tackle the tough job of teaching our kids.

Here in Texas, we have some of the best teachers in the world. I want to see them supported and given the resources they need to help our kids succeed. We must stop the efforts at forcing teachers to comply with radical indoctrination and get the focus back on education.

I am completely behind our teachers, students, and parents. I am running for Congress to work for them in Washington.

Our economy was booming under President Trump and we can’t let the new administration sabotage that in the name of their liberal agenda. We MUST stand for the free market and stand against efforts to impose socialism. We must let businesses get back to business without government interference and allow honest Americans to make an honest living.

We must stop apologizing for American excellence and instead encourage export and trade of American goods to bolster the global economy. A rising tide lifts all ships and a strong economy is good for Americans as well as our global partners.

STAND UP FOR VETERANS & POLICE

Those who service us at home and abroad deserve our support. I have nothing but respect for those who choose to dedicate their lives to service in uniform. I was honored to work alongside many fine men and women over my 20 years in the Navy and I have never forgotten what it takes to make the decision to serve. The personal, physical, and other sacrifices that must be made in order to serve in our law enforcement and armed forces can’t be summed up.

Whether they serve behind a badge or with an F-22 in Afghanistan, those who put their lives on the line to defend us are owed a debt of gratitude we can never repay. I will always stand with our military, veterans, first responders, and law enforcement, and I will stand against any and all attacks against them.

Anyone who has ever run a business or even balanced a household checkbook knows this simple rule—DON’T SPEND MORE THAN YOU HAVE. It’s time Americans stopped footing the bill for Washington’s tax-and-spend policies.

We need to prioritize cutting wasteful spending and stopping tax increases. For too long, Washington has passed bloated budgets and gotten away with it. We need to make Washington spend less instead of charging taxpayers more.

Elections are the cornerstone of our republic and the liberty of our nation. Texas has some of the most secure elections in the world, but even one case of voter fraud is one too many and other states have not held themselves to our standard of excellence.

I will stand against voter fraud and efforts to subvert the sanctity of our electoral process. This is not a partisan issue, this is a commonsense issue. Our votes must be cast, collected, and counted in a way that is 100% secure and accurate.

Israel has been our strongest supporter and constant ally in the fight against terrorism. As a trade, defense, and global partner, Israel has strengthened American interests on all fronts. We can’t turn our back on them now.

As your next Congressman, I will stand with our Israeli allies and work to uphold President Trump’s decision to recognize Jerusalem as the official capital. America must stand with Israel.