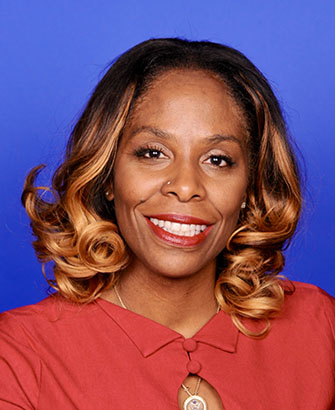 For the 117th Congress, the members of the House Steering and Policy Committee unanimously appointed Congresswoman Plaskett to serve on the House Committee on Ways and Means, the oldest and one of the most exclusive committees in Congress. In true historic fashion, Mrs. Plaskett is the first Member from a U.S. territory and the fourth African-American woman to serve on this committee.

During her time as a member of the Committee on Transportation and Infrastructure, Mrs. Plaskett advocated for improvements to critical infrastructure in the U.S. Virgin Islands and the insular areas, as well as the development of economically depressed rural and urban areas. As a former attorney in public finance law, Congresswoman Plaskett sees the importance of Public Private Partnership and worked to create constructive innovative mechanisms for incentivizing economic development in underserved areas in America. During her service on the House Transportation and Infrastructure Committee, Mrs. Plaskett worked to ensure that the federal government is responsive to the needs of Americans in disaster-stricken areas.

Similarly, during her tenure as a member of the Committee on Agriculture, Mrs. Plaskett has sat on multiple subcommittees including, Commodity Exchanges, Energy and Credit, Livestock and Foreign Agriculture and chaired the largest Agriculture subcommittee– Biotechnology, Horticulture and Research. On these committees, Congresswoman Plaskett has worked to ensure that the Virgin Islands and other rural communities receive adequate funding for necessary rural development programs including public infrastructure development, access to high-speed broadband, and small business support. Mrs. Plaskett has advocated to protect programs that provide needed supplemental assistance to hardworking families.

Most recently, Congresswoman Plaskett launched the Congressional Caucus on Black Innovation (CCBI) with her colleagues Reps. Ritchie Torres (NY-15) and Marilyn Strickland (WA-10) to advance the goal of Black founders and innovators having equitable access and advancing Black economic sustainability, ownership and mobility. Congresswoman Plaskett and her fellow CCBI co-chairs will work to engage policymakers to advance the technological, creative, economic and social impacts of Black innovators across industries—with a special emphasis on technology, fintech and the future of work.

After the attack and insurrection of January 6, 2021 at the US Capitol, the House of Representatives voted to impeach former President Donald J. Trump for “incitement of insurrection”, alleging that he had incited the January 6 attack on the US Capitol. These events were preceded by numerous unsuccessful attempts by Trump to overturn the 2020 presidential election, as well as his pushing of voter fraud conspiracy theories on his social media channels before, during, and after the election. Stacey Plaskett was appointed by the Speaker of the House Nancy Pelosi to be one of the nine impeachment managers to prosecute President Trump in the US Senate. Plaskett conducted some of the most detailed presentations of the events of the day and was one of the managers chosen to respond to the Questions of US Senators during a day of the proceedings. Her presentation is seen by legal scholars and the public as one of the most powerful of the trial. At the time of the Senate trial, Stacey Plaskett was the only Black woman in the Senate Chamber.

Mrs. Plaskett earned her undergraduate degree from Georgetown University School of Foreign Service, and her Juris Doctorate from American University’s Washington College of Law. Congresswoman Plaskett has a long history of public service, having started as an Assistant District Attorney in the Bronx DA’s office as well as having worked as a political appointee at the Department of Justice where she served as Senior Counsel under both Deputy Attorney General Larry Thompson and his successor James Comey. In the Virgin Islands, she has served as General Counsel for the Virgin Islands Economic Development Authority, charged with the economic development of the U.S. territory and has also worked in private practice as counsel and transactional attorney for numerous companies.

Most importantly, Stacey is the mother of 5 – three adults and 2 younger children and the wife of Jonathan Buckney-Small. She and Jonathan are avid readers, cooks and news junkies.