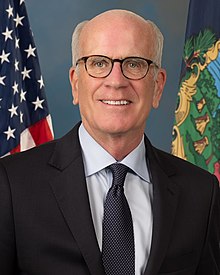 Contact Senator Peter Welch
Peter Welch has been a champion for working Vermonters throughout his career. Since his election to the House of Representatives in 2006, he has been widely recognized as a thoughtful and effective legislator who chooses governing over gridlock.

Peter Welch has been a champion for working Vermonters throughout his career. Since his election to the House of Representatives in 2006, he has been widely recognized as a thoughtful and effective legislator who chooses governing over gridlock.

Peter’s record reflects his strong commitment to addressing difficult challenges facing our state and nation: affordability, childcare, climate change, and protecting our democracy. In an era of partisanship, he has worked across the aisle to advance common-sense solutions to the issues that matter to Vermonters.

Peter was born in Springfield, Massachusetts in 1947. He graduated from the College of the Holy Cross in 1969. After working in Chicago fighting housing discrimination as one of the first Robert F. Kennedy Fellows, he enrolled in law school at the University of California, Berkeley, and graduated in 1973.

After law school, he settled in White River Junction, Vermont, where he worked as a public defender before founding a small law practice. He was first elected to represent Windsor County in the Vermont Senate in 1980. In 1985, he was unanimously elected by his colleagues to lead the chamber, becoming the first Democrat in Vermont history to hold the position of President Pro Tempore.

In 2006, Peter was elected to Vermont’s only seat in the U.S. House of Representatives. His campaign gained nationwide attention for being the only contested congressional race in the country where both candidates refused to air negative ads.

In Congress, Peter has been a leading advocate for clean energy and energy efficiency, cutting the price of prescription drugs, investing in infrastructure, and expanding broadband and telemedicine in rural America.

In 2022, he was elected to the United States Senate, where he plans to continue working across the political spectrum to serve Vermonters.

He is married to Margaret Cheney, commissioner of the Vermont Public Utility Commission. They share a home in Norwich, Vermont.

Peter Welch has represented Vermonters in Congress since 2007. In an era of partisanship and division, he is widely recognized as a progressive leader and a skillful legislator who chooses governing over gridlock.

He was born in Springfield, Massachusetts and graduated from the College of the HolyCross. As a member of the first class of Robert F. Kennedy Fellows, he fought housing discrimination in Chicago after college and went on to earn a law degree from the University of California, Berkeley. After law school, he settled in Vermont’s Upper Valley where he worked as a public defender and then founded a small law practice.

He was elected to the Vermont Senate in 1980 and later was selected to lead the chamber, becoming the first Democrat in Vermont’s history to hold the position of Senate President Pro Tem.

In Congress, Peter is a cosponsor of the Green New Deal and is a leading advocate for lowering the cost of prescription drugs, providing affordable childcare, expanding access to broadband in rural America, and protecting our imperiled democracy.

He serves as a chief deputy whip for the House Democratic Caucus and is a senior member of the influential Energy and Commerce Committee and Oversight and Reform Committee. He also serves on the House Permanent Select Committee on Intelligence.

Peter is married to Margaret Cheney. They share a home in Norwich, Vermont.

Signed a letter to President Biden, calling on him to cancel up to $50,000 in federal student loan debt, per borrower.

Voted to pass the Build Better Act, which included a $150 billion investment in affordable housing efforts.

Climate and the Environment

Authored Hope for Homes Act to establish a grant program for people looking to invest in energy efficiency upgrades in their homes.

Introduced the American Renewable Energy Act of 2021 to reduce carbon emissions, improve air quality, and drive the deployment of clean energy resources around the country to improve public health.

Supported American Rescue Plan increases in funding for home and community based services for individuals with disabilities, including behavioral health support.

Working to ban bump stocks and limit the size of ammunition clips.

Throughout his career, Peter has been a leading champion for prescription drug reform, helping pass legislation through the House that will cut the skyrocketing cost of prescription drugs for all Americans. Our work isn’t over. Americans have been ripped off by Big Pharma for too long, and Peter believes that it’s time to finally stand up to the drug companies and stand up for Americans.

Cosponsored the COVID Community Care Act, which would provide funding to HHS to prevent, prepare for, and respond to COVID-19 in medically underserved communities.

Cosponsored and voted for the Equality Act, which would prohibit discrimination based on sex, gender identity, and sexual orientation in businesses open to the public, education, housing, banking, and jury selection.

Cosponsored the Every Child Deserves a Family Act, which would prohibit any public child welfare agency receiving federal funds from discriminating against potential foster or adoptive parents because of their sexual orientation, gender identity, or marital status.

Supported an amendment to the National Defense Authorization Act to end the ban on transgender military service.

Cosponsored the Therapeutic Fraud Prevention Act, which would classify conversion therapy practices as fraudulent and direct the Federal Trade Commission to protect consumers from these harmful and discredited practices.

Worked on a bill that funded a program providing medication-assisted treatment around the state. When funding for the program ran out, steered nearly $1.2 million in federal money to resume and expand the program so 400 people in Vermont can have a methadone-dispensing device of their own. Advocates say this will improve — and possibly save — lives.

Cosponsored the Comprehensive Addiction Resources Emergency Act, which would provide states and communities with $100 billion in funding for treatment and recovery services.

Cosponsored of the Mainstreaming Addiction Treatment Act, which will expand access to buprenorphine, a life-saving recovery medication

Cosponsored the Restaurant Relief Package (RRP) in the American Rescue Plan that passed in 2021. Peter continues to work with local Vermont restaurant owners and won’t stop fighting to replenish the RRP fund so these local businesses get the support they need.

Authored the Save Our Stages Act in Congress, leading the effort in Washington to provide funding to eligible live music venues, movie theaters, and performing arts organizations that were shuttered by the COVID-19 pandemic. 65 grants have been awarded to Vermont venues, totalling over $29.9 million from the SBA grant program – Shuttered Venues Operators Grant – created by this bill.

Strongly supported the Paycheck Protection Program (PPP), which provided businesses in Vermont with more than 21,000 loans totaling upwards of $1.7 billion. The first round of PPP assisted nearly 12,000 Vermont small businesses receive grants to get through the pandemic, and helped save as many as 114,000 jobs.

Peter got his start in public service in the civil rights movement, after he left college to go to Chicago to work for a community organization fighting discriminatory housing practices. There he witnessed firsthand the ways in which racism in our county is systemic and ingrained. That experience still motivates him to this day. The only way to move towards a truly equitable future is by addressing these injustices head on. Peter understands that these efforts must include environmental justice, economic justice, the protection of voting rights, and address disparities in health care and our criminal justice system.

Cosponsor of the Green New Deal which aims to protect vulnerable low-income and minority communities from exposure to harmful or toxic chemicals and the impacts of climate change – while creating clean energy jobs.

Cosponsor of the First Step Act, to guide housing and program assignments to reduce recidivism rates of formerly incarcerated individuals.

Black Americans are nearly four times more likely to be arrested for marijuana possession than white Americans, which is one of the reasons Peter supports the federal decriminalization of marijuana.

Cosponsored the PRO Act to remove barriers to organizing and strengthening union rights.

Supported providing up to 12 weeks of paid leave, capping the cost of childcare for most Vermont families at 7% of their income, and investing in affordable housing in the Build Back Better Act.

Introduced the Connecting Americans Act to invest $80 billion to provide affordable broadband to all Americans.

Supported the House passage of the Build Back Better Act to provide the largest investment in the history of our country to address climate change, including Peter’s Hope for Homes Act to provide tax incentives for home energy retrofits.

Voted for the Consumer Fuel Price Gouging Prevention Act to penalize Big Oil from profiting on global crises and bring greater transparency to the secretive industry.

Fighting to reign in outrageous price increases from Big Pharma to save patients money at the pharmacy counter.

Cosponsored the Women’s Health Protection Act which would codify Roe v. Wade into law and protect reproductive freedom for all. Support fully funding Planned Parenthood and Title X family planning services. Cosponsored the Equal Access to Contraception for Veterans Act, which would require the VA to provide contraceptives without a copay for veterans who receive their care through the VA health system.

Strengthening Unions & Building Better Workplaces for Our Frontline Workers Peter believes that everyone deserves bargaining rights and a voice in the workplace and that strong unions improve the lives of workers with good wages, safer working conditions, and better protections.

Cosponsored the Protecting the Right to Organize (PRO) Act, which would expand labor protections related to employees’ rights to organize and collectively bargain in the workplace.

Cosponsored the Revising and Expediting Actions for the Crisis Hotline (REACH) for Veterans Act (H.R. 5073), which would improve the Veterans Crisis Line. Support additional funding for the Veterans Administration and its services

Called for increased funding for the VA Supportive Housing Program, which provides housing and supportive services to homeless veterans.